Manitoba Harvest CBD Oil Drops are at the front line of their CBD supplement selection, but do they showcase the brand’s 20 years of hemp industry experience?

These natural CBD oil drops are seemingly made for anyone, including people with certain dietary restrictions. The drops are derived from high-quality, organic ingredients sourced in the U.S., and the brand maintains expert oversight to ensure that each batch lives up to their high standards.

Manitoba Harvest’s CBD Oil Drops are simply made—broad-spectrum hemp extract combined with organic MCT Oil (and organic peppermint oil for the peppermint-flavored variety). There are no sweeteners, gluten, or additives, and the tincture includes no animal ingredients. These don’t contain any targeted ingredients, only hemp, and MCT oil, so they can be used any time of the day.

The Minnesota-based brand starts with premium non-GMO hemp from U.S. hemp farms, which is sent to their manufacturing facility where it’s carefully extracted using a Supercritical CO2 process. Then, the oil is carefully refined to remove THC, leaving behind less than 0.01 percent per bottle.

Although simple, these CBD Drops aren’t basic. Manitoba Harvests works hard to deliver full traceability from seed to sale, ensuring only the best ingredients and finest hemp are used. They finish off this oversight with independent third-party lab testing that looks at the potency and evaluates for chemical residues, microbials, and other contaminants. Plus, the consumer-forward brand makes the results easy to find on their website.

Aside from careful tracing, the B-Certified brand is grounded in sustainable practices. Each step of the manufacturing process is optimized with sustainability in mind and each tincture comes in a recyclable, compostable package. These premium CBD Oil Drops start at $24.99 a bottle, putting them within reach for most consumers. 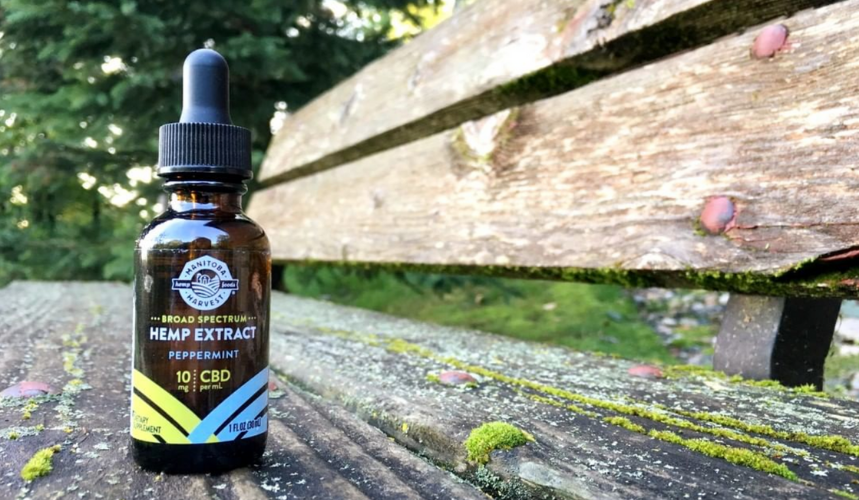 We got Manitoba Harvest 50 mg CBD Oil Drops in the peppermint flavor. Initially, everything looked as it should—the clear, viscous tincture was well-packaged in a sturdy glass bottle with a graduated dropper lid.

We took an initial dose (one full dropper, or 50 mg) about half an hour before dinner, and just before it was time to eat the effects eased into play. The tincture is mild, with no hempy taste, but it does taste boldly like peppermint. (In retrospect, it doesn’t make a great precursor to a meal, but would probably help to freshen breath afterward!)

At first, we just noticed a slight calmness that made it easier to shake off anxiety. After an hour and fifteen minutes, though, we realized the full effects had yet to come. Our usual back dicsomfort had dialed down from a six to a two on the pain scale, which we consider a huge win! The best effect, though, was slightly increased focus and energy—something we didn’t expect from a basic peppermint tincture. This single 50 mg dose put us at ease, leveraging a creative flow and intense focus that helped us get stuff done.

Given these effects, we took another minty dose first thing the next morning. After an hour, the same boosted focus arrived, and we were grateful! A morning dose once again helped to ease back pain and give us the mental focus and stamina to power through the first half of the day. Almost six hours later, these effects began to wane, but it took almost eight hours for back pain to return at full force.

Ultimately, we’re impressed with Manitoba Harvest’s CBD Oil Drops, and their decades of experience shines through this brilliant, natural hemp formula. Because these offer a mild flavor and low-potency options, they’d make a great option for beginners. However, the prominent effects make these CBD Drops perfect even for advanced, daily CBD users.

This was my second purchase of Peppermint oil drops. I'm an avid 65 young tennis player with a total knee replacement. The drops help with after tennis recovery and aids me in sleeping well. I use the drops with and without food or drink.