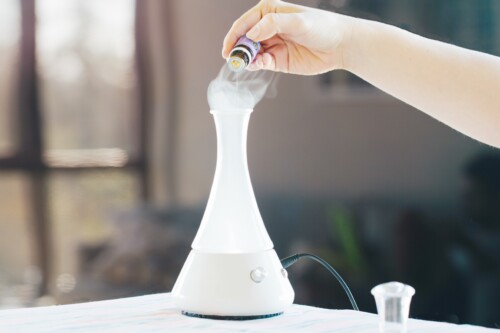 Cannabidiol, also known as CBD, is one of the 113 chemical compounds found in marijuana, accounting for 40 percent of the plant’s extract. Unlike THC, the chemical component which gives smokers a sensation of being “high,” cannabidiol is a non-psychoactive component of marijuana, so the mood of the people who use it will not change. However, according to medical research, diffusing CBD oil can be very helpful in alleviating some of the symptoms of lung cancer which may be extremely distressing, such as pain and nausea.

While the majority of patients came to struggle with the disease as a consequence of tobacco smoking, some of them developed lung cancer after they had been exposed to asbestos, a naturally occurring carcinogenic mineral which was a central part of numerous occupations during the last century, such as boiler maker, power plant operator, asbestos miner, shipyard worker, and welder.

The Benefits of CBD Oil on Lung Cancer Patients

People who struggle with lung cancer seem to benefit from the pain-relieving qualities of CBD oil diffusing the most. In 2019, a study focusing on an 81-year-old man who was suffering from lung cancer found that CBD oil had a major role in diminishing the size of his tumors. While the research is singular, it provides important information regarding the effects of CBD oil on tumor growth in lung cancer patients, as well as a starting point for further medical studies.

Regardless of whether a person ended up with lung cancer due to asbestos exposure or due to tobacco smoking, CBD oil can also be incredibly effective in pain management, as well as in counteracting the side-effects of chemotherapy: namely, fatigue, nausea, headache, and nerve pain.

How to Use CBD Oil If You Struggle with Lung Cancer

If you suffer from lung cancer and decide to try using CBD oil to ease your pain, you will firstly need a device to diffuse it. Oil diffusers are widely available to purchase. Prices vary depending on the technology involved. They disperse the CBD oil as a fine vapor throughout the air so that you can inhale it.

By diffusing a few drops of CBD oil in water and allowing the vapors to enter the body through the respiratory system, lung cancer patients will notice a significant decrease in their level of pain.

What Do Lung Cancer Patients Say about Diffusing CBD Oil?

As the use of CBD oil for lung cancer pain management is increasing in popularity, we asked 64-year-old Michelle D. to talk about her experience with CBD oil.

“I’ve been suffering from non-small-cell lung cancer for over one year now. Asbestos was the culprit behind my diagnosis. In the ‘70s, I was working in a textile mill and that’s where I was exposed. Soon after I found out about my cancer, I decided to try as many alternative remedies in addition to chemotherapy as I could find. It was three months ago when I discovered CBD oil and it’s honestly one of the best alternative remedies I’ve found so far. I diffuse it several times a week, usually when I get back home from chemotherapy, and it helps with my symptoms a lot. My pain is more bearable and my nausea just vanishes,” says Michelle D.

As a procurement clerk at Environmental Litigation Group, P.C., a law firm based in Birmingham, Alabama, which specializes in toxic exposure cases, Eddie Perry is responsible with mailing client correspondence, taking care of supplies, doing maintenance, as well as visiting clients at their location if they are unable to come in person to the office due to health reasons. With over 15 years of professional experience, he also witnessed the terrible effects of occupational asbestos exposure within his family.

After several major injuries - including 2 hip surgeries and 2 severe concussions - Erin Spong was in search of a holistic pain and anxiety management remedy. Discovering CBD after graduating from the University of Missouri, Erin found this form of medicine to be the healthiest and most reliable treatment. As the Editor of The CBD Encyclopedia, Erin is stoked to meld her passions for writing and health, and to guide others to the perfect CBD products for their needs and lifestyles.

CBD Carrier Oils: What Are They and Which One is Best?